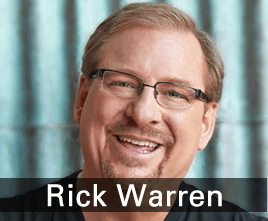 Rick Warren joins us for the next episode of the Find Your Calling Podcast. In this insightful conversation, he shares his story of discovering his calling and the many factors that contributed to finding specific clarity.

As the best-selling author of numerous books, including The Purpose Driven Life, and senior pastor of Saddleback Church, Rick has equipped the worldwide Church and its leaders to pursue both faithfulness and fruitfulness. He has also been a personal friend for a number of years. In the podcast excerpt below, Rick talks about the essential importance of community in finding and following your unique calling, as well as our responsibility to point out calling in others.

“Your calling is connected to other people. You’re never just called in a vacuum. The Bible says that we’re one body, we’re the same spirit, and we’ve all been called to the same glorious hope. Scripture talks about how we’re holy partners in a heavenly calling. Many verses talk about the fact that we’re better together. We actually discover our calling in community. If you really want to discover your unique calling, I have two very practical suggestions: 1) Get in a small group where people can actually get to know you because they will notice things that you don’t notice in yourself; 2) Just start serving in a ministry.

“A lot of people are just sitting waiting for God to send a banner in the sky to tell them what they’re supposed to do with their life, and it’s not going to happen. God won’t steer a parked car. You’ve got to be moving. Stop looking for a vision, and just start looking for a verse in the Bible. Then just start serving, and try something. When you do what you’re called to do, other people will notice often before you. A lot of times when you’re shaped to serve God in a certain way, you’re so good at it that you don’t even realize how good you are. You think everybody else is good at it, too. They’re not. For example, if you’re a natural organizer, you think everybody’s organized. They’re not.

“So often, other people will notice your calling before you do, which I would say, by the way, is one of the most powerful things you can do. God will use you to point out giftedness and calling in other people who may not see it. Some of the most powerful words you can say to a young man or a young woman is, “Hey, you know what you’re good at? When you talk, people listen, or when you write that, people read it.” Affirming others makes a difference and gives people permission to go after their calling to advance the Kingdom of God. “

Rick Warren founded Saddleback Church in Lake Forest, Calif., in 1980 with one family. Today, it is an evangelical congregation averaging 30,000 weekly attendees, and has more than 300 community ministries to groups such as prisoners, CEOs, addicts, single parents, and those with HIV/AIDS. He also leads the Purpose Driven Network of churches, a global coalition of congregations in 162 countries. He is the author of multiple books for the Church, including The Purpose Driven Life, which has sold more than 32 million copies, and The Purpose Driven Church, listed in “100 Christian Books That Changed the 20th Century.” He and his wife, Kay, live in Lake Forest, California.