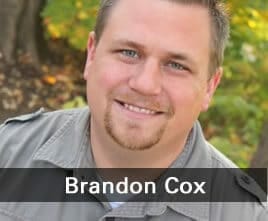 Brandon Cox joins us for the next episode of the Find Your Calling Podcast. As a pastor and friend to other pastors, Brandon shares some of his backstory that ultimately led him to full-time vocational ministry.  Most recently, his calling brought him to Bentonville, Arkansas where he and his wife, Angie, planted Grace Hills Church.

Brandon has pursued his calling from an early age.  At age 17, equipped by several generations of family involved in business, Brandon dreamed of his future making money.  While riding on a bus to a Future Business Leaders of America gathering, Brandon felt God nudging him toward ministry.  After reading Jeremiah 1, Brandon wrote down in his Bible the sense he was feeling:  “called to ministry”.

In this edition of the Find Your Calling Podcast, Brandon shares his journey of following that nudge on the bus.  After his first few ministry assignments, he was feeling drained and never wanting to be a senior pastor.   However, that wasn’t God’s plans.   Brandon led his next church through the 40 Days of Purpose study and gained  fresh perspective on ministry.  Eventually a passion for creative communication and social media emerged.  Brandon was hand picked by Rick Warren’s Saddleback team to oversee the Pastors.com online community.  After being on staff with Rick, a passion was ignited for planting a church.  Rick explained that some people are “called to Saddleback” while other are “called through Saddleback.”  Join Brandon as he explains his journey.

Brandon Cox became a pastor at age nineteen and has served in that role in small churches, as well at Saddleback Church, one of America’s largest and most influential churches. He’s now planting Grace Hills Church in northwest Arkansas. Brandon also serves as editor, mentor, and community facilitator for Pastors.com and Rick Warren’s Pastor’s Toolbox, one of the world’s largest online communities of church leaders. He’s an avid, top 100 blogger (according to Kent Shaffer’s semiannual list) and lives in Bentonville, Arkansas with his wife, Angie, and their three awesome kids.