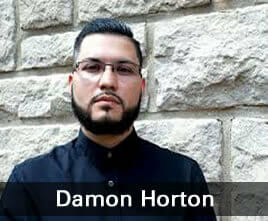 Damon Horton joins us for the next episode of the Find Your Calling Podcast. As a pastor, author, and former Christian rapper, Damon shares some of his backstory that ultimately led him to his current role as a church planter in Long Beach, California.

Damon Horton’s mother heard the Gospel and made a profession of faith at a Billy Graham crusade in Kansas City. This shaped the rhythm of his early life.  He met his future wife in the inner city of Kansas City while doing evangelistic outreach with his parents.  Damon was a natural evangelist utilizing Christian rap to reach youth.  He became a youth pastor and eventually went to seminary.  He pastored several different churches before assuming the role of Executive Director of ReachLife Ministries.

Convicted by his calling and with the financial responsibilities of a young family, Damon and his wife left the comfort and security of their current role to become church planting residents at the Summit Church in Raleigh Durham.  From there they felts God’s strong and clear call to move across the country to Long Beach, California to plant a church.

Damon Horton describes personal calling as the intersection of talents, burdens and giftings, and of open doors and closed doors as led by God.  Damon sees his calling as challenging and communicating scriptures, via the local church, in ways people can understand.  His core essence if creative communication of Biblical truths.

Damon describes the clues embedded in his life and childhood pointing to his calling, and his personal journey of seeking to follow God’s leading in his life.  Damon’s story demonstrates the power of looking hard at the “I remember when” events in our life.  God’s fingerprints were clear in Damon’s life as they are in ours.

D.A. Horton serves as Pastor of Reach Fellowship a church plant in North Long Beach, CA & as Chief Evangelist for the Urban Youth Workers Institute (UYWI). Prior to his current roles he served as an urban church planter/pastor in Kansas City, MO, a National Coordinator of Urban Student Ministries at the North American Mission Board (NAMB) and the Executive Director at ReachLife Ministries, the non-profit ministry of Reach Records.  He has authored three books; G.O.S.P.E.L., DNA: Foundations of the Faith (published through Moody Publishers) and Bound to Be Free: Escaping Performance to be Captured by Grace, (published through NavPress). He and his wife of 13 years Elicia are co-authoring a book on marriage. D.A. and Elicia have two daughters, Izabelle and Lola and one son, D.A. Jr. (aka Duce).