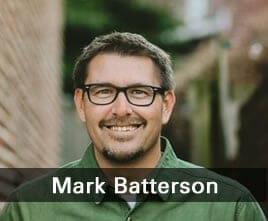 Mark Batterson joins us for the next episode of the Find Your Calling Podcast. An author, pastor and personal friend, Mark shares some of his backstory that ultimately led him to preach and write, including what he calls his “summer of seeking” and the moment that brought him to Washington, D.C., where he and his wife, Lora, would eventually plant National Community Church.

Mark has pursued his entrepreneurial calling in diverse ways, including church planting and writing. A New York Times best-selling author, he has influenced thousands of people worldwide, and in the podcast excerpt below, Mark tells us how people have influenced his calling—those who spoke into his life at a certain point and in hindsight were there in the right place at the right time.

“I remember my grandfather when I was five years old (he died when I was six) kneeling next to his bed, taking out his hearing aid, and praying for me by name. He couldn’t hear himself but everyone in the house could. That’ll shape you. I remember a Bible study minister I never met. When I was a sophomore in high school, I gave a speech that was really more like a salvation sermon. My mom sent a copy of the speech to my grandma who sent it to her Bible study teacher who asked the question, ‘Has Mark ever thought about ministry?’ I remember my father-in-law who passed 18 years ago, but I wouldn’t be in ministry if it weren’t for him. I try to preach the way he preached and lead the way he led. And then I’ve had the privilege of having a spiritual father or mentor for 20 years who has really taken me under his wing. A former pastor and former college president, he and his wife were two of the 19 people our first week at National Community. Without the influence [of these people] in my life, I know I wouldn’t be anywhere close to where I am today.”

Mark Batterson serves as lead pastor of National Community Church in Washington, D.C.  One church with 20 locations, NCC focuses on reaching emerging generations and meets in movie theaters throughout the D.C. metro area. Mark is the New York Times bestselling author of numerous books, including The Circle Maker, If, The Grave Robber and many others. He and his wife, Lora, live on Capitol Hill with their three children, Parker, Summer, and Josiah.